The United Kingdom is the most expensive destination among the top-40 financial-hub countries* for expatriates from foreign companies. This was one of the findings of the latest MyExpatriate Market Pay survey published annually by ECA International, the world's leading provider of knowledge, information and software for the management and assignment of employees around the world.

When considering the cost of an expatriate package companies need to factor in three main elements: the cash salary, benefits – such as accommodation, international schools, utilities or cars – and tax. To assist companies relocating staff with benchmarking their packages against the market, ECA conducts its annual MyExpatriate Market Pay Survey of pay levels for expatriates around the world, including benefits, allowances, salary calculation methods and tax treatment.

Over the past couple of years, it has become cheaper in USD terms to send expatriates to the UK due to the pound’s decline in value. The cost of a typical expatriate package for Middle Managers in the UK is now GBP 262 900 / USD 384 400.

“The total cost of expatriate packages in the UK, in US dollars, has fallen by 11% in the past couple of years. This is mainly due to a weakened pound against the US dollar making the UK comparatively cheaper. In local terms, typical Middle Manager expatriate salaries have increased by 3% over this period,” said Steven Kilfedder, Production Manager, ECA International.

However, the UK still has some of the highest personal tax rates in the world and the second highest cost for typical expatriate benefits.

“The tax element is the most expensive component of an expatriate package in the UK by a considerable margin. Once tax is removed, the UK falls out of the global top five most expensive locations in the world. The cost of providing benefits is also considerable, at around double the salary element due to high expatriate rental accommodation prices,” explained Kilfedder.

When choosing an expatriate pay approach, companies need to be clear about the reasons behind the assignment so that their choice reinforces this. This can help organisations to decide whether they wish to create equity among home or host country peers – something that has become even more complex as companies manage increasingly diverse nationalities in and out of different markets. This will also need to be balanced against benefits and costs to the business. 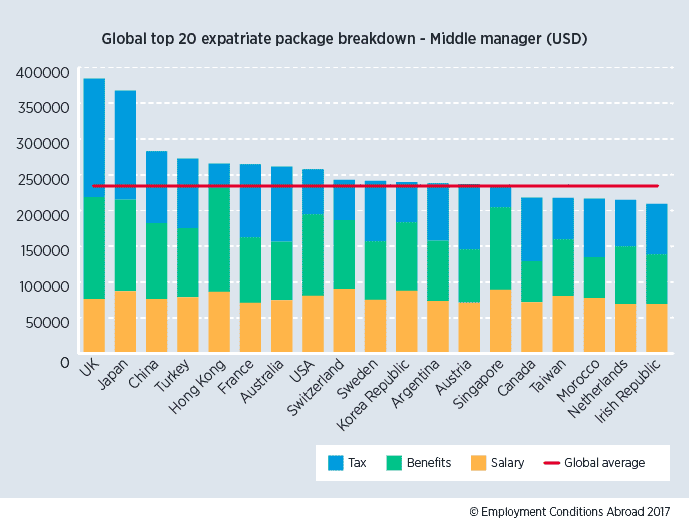 France is sixth in the global rankings this year. The value of a typical expatriate package for Middle Managers in France is now EUR 232 000 / USD 264 500. The cost of an expatriate package to foreign companies has fallen in France by 16% in USD terms over the past two years due to the euro declining against the dollar over this period.

Expatriate packages for Middle Managers in Germany are the lowest out of all ranked European countries. The combination of comparatively low salary, benefits and tax all contribute to Germany ranking 23rd out of the 27 locations included in ECA’s rankings. The total cost of an expatriate package for Middle Managers in Germany is EUR 177 800 / USD 202 800 – falling by 15% over the past two years, also due to the euro’s decline against the dollar.

"In the US, the costliest element of the package is the benefits provision, the fifth highest in our global rankings. To incentivise employees to accept an assignment to some countries companies will often grant additional allowances on top of the base salary that aren’t necessary when sending staff to the US. In Hong Kong, for example, dangerous levels of air pollution, combined with high international school fees and accommodation costs, mean that companies have traditionally offered generous expatriate packages to attract highly sought-after talent,” said Kilfedder.

Japan is home to Asia's most expensive expatriate packages, second only to the UK on a global scale. On average, a package for an expatriate Middle Manager there is worth USD 367 500. The total package has risen by a significant amount from last year’s total, by around 12 per cent, with the yen strengthening against the US dollar in the survey period.

Expatriate pay packages in Hong Kong have fallen to a five-year low, falling by two per cent since 2012 in USD terms. However, they are still the fifth highest in the rankings this year. The value of a typical expatriate package for Middle Managers in Hong Kong is around USD 265 500.

A total package for an expatriate Middle Manager in China is worth around USD 282 500 on average. Expatriate packages in China have declined in USD terms from last year’s totals due to the yuan weakening against the dollar over this period.

Countries like Qatar, United Arab Emirates and Saudi Arabia sit near the bottom of the global rankings. Even though the highest global Middle Manager expatriate salaries are found in Saudi Arabia and the UAE, as the employee pays no tax on their salaries or benefits in these countries, the total cost is low by international standards with both sitting in the cheapest six locations in the global rankings. The values of expatriate packages in these locations are USD 172 800 and USD 188 400 respectively. Qatar will cost foreign companies the least out of our ranked locations, at USD 160 200 per annum.

* The list of countries used here is based on countries which have cities appearing in the top 40 of The Global Financial Centres Index (GFCI) 19 – March 2016. The GFCI has been produced since 2007 by commercial think-tank the Z/Yen Group in order to examine the major financial centres globally in terms of competitiveness. It draws on data from the United Nations, World Bank and EIU as well as over 29,000 financial centre assessments from an online questionnaire.

The results, free to participants, enable companies to benchmark their expatriates' actual salaries against the market. More than 290 companies took part in the survey covering 160 countries and over 10 000 international assignees.

Figures used in this release were collected in the later stages of 2016 and refer to a Middle Manager position based on 80 ECA Points. ECA Points is a job evaluation system that measures the influence, scope and responsibilities of a job.

There are several ways in which salary packages for expatriates may be calculated. The information provided by participant companies in our survey relates to home and host-based salary systems as well as locally-hired and localised expatriates and expatriates on indefinite contracts.

Certain types of allowances are specifically excluded from the analysis in the reports. These are one-off payments such as allowances for outfit, furniture, disturbance and relocation.

Benefits values are based on standard ECA assumptions* and have been derived from data in ECA's accommodation and benefits reports to provide an estimate of the cost of providing these benefits. The actual costs or allowances paid to cover these benefits vary widely according to each company's policy.

Tax figures used here refer to employee taxes and do not take company contributions into account. For ease of comparison, it is assumed that cash allowances are paid to employees to cover the cost of any benefits provided.

*The accommodation figure is representative of the cost of housing two adults and one child. Utilities covers heat, light, water and telephone charges. Education assumes one child attending a local international school. The car figure covers annual running costs and is based on a standard car’s value (2000 cc), depreciated over five years.

Who do you think should be an APAC EMMAs winner?

ECA International is the market leading provider of knowledge, information and technology that enables businesses to manage their international reward programmes. Partnering with thousands of clients on every continent, we provide a fully integrated suite of quality data, specialist software, consultancy and training. Our unparalleled insights guide clients as they mobilise their most valuable resource: people. We make the complex world of international mobility simple, providing clients with the expertise and support they need to make the right decisions - every time.
Follow